Lise Honoré is an autodidact artist, and originally educated as a sign and house painter. After her education and training she gets a job in an advertising company, where her job is to manufacture different kind of boxes. Her dedicated direction towards art takes place in 1971 where she attains her first ceramic workshop. Clay becomes her starting point, and appears to be an accessible and manageable material in the beginning. Her intention is to create items which are meant to be used. But she soon starts working with clay in other ways.

Honore is already a dominant figure in the art-environment of Copenhagen by the early 1970s. She has several solo-exhibitions and from 1972 she becomes a member of the artist group ”GYRR.” At her first exhibitions she shows ordinary everyday objects (plastic bags etc.) created in stoneware, which at first sight looks to be made out of cardboard or plastic. 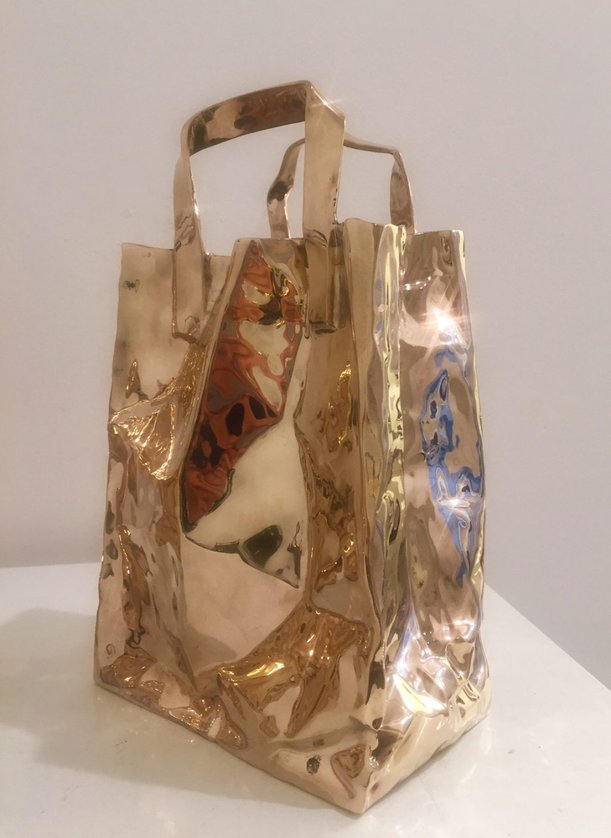 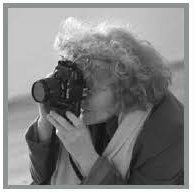 In the workshop “Struktur-68” in Hague, she involves herself in working with different materials. Here the boxes for the first time are cast in bronze, using the casting-technique “cire perdue” (lost wax). This technique has been used since the antiquity, primarily for the purpose of bronze casting. Over a core of clay a figure is modelled in wax. This becomes encapsulated in a moulding jacket of clay. The wax melts and liquid bronze is poured into the void that has emerged. The moulding jacket gets removed, and the clay core, which is fixated with long nails during the casting process, is also removed. Using this method, Lise’s bags contain a warmer expression than the cooler clay. She is consistent with her use of packing-containers as her motives, though with new additions; boxes, packages, coffee bags, and milk cartons are slowly added to the repertoire.

During this period she works with serigraphs and collages in a concrete manner of expression. A part of the serigraphs are commissioned works to companies. As an example she has a collaboration with the architect Claus Lange, and works with the colour scheme of Louis Poulsen’s house in Nyhavn. This is not a completely unknown environment for her as she for a long time has had her roots in architecture and design, with a focus on form, colour, line and patterns.

In the years 1976-1978 she travels to the United States, where the new surroundings make a huge impact on her. She develops a strong use of colour, with pink, turquoise and yellow as her favorites, and which would mark her as an artist because of her courage to think out of the box. In 1986 she travels to Rome, where, after a residency at ”Den Skandinaviske Forening”, she returns to Denmark. With her she brings big drawings which again show a new side of her artistic development – the drawings depict the urban landscaping, the sky-scrapers and tall buildings in strict compositions, all in her newly attained world of colour.

Lise Honoré is always involved in exciting plans and decoration projects. As artistic consultant for HT in 1984 she chooses the (now very iconic warm) yellow colour for the buses in Copenhagen. The colour soon spreads to other cities around the country – a phenomenon that among the critics of the time was know as ”yellow fever.” The colour’s official name is “RAL 1028” bus is also just know as ”HT-yellow.”

The following quotation appears in the catalogue in the occasion of Lise Honoré‘s solo-exhibition at Galerie Birch in 1990, ”Lise’s Verden / The World of Lise:”

”Lise is not an outstanding ceramist, nor a brilliant sculptor. She is not great with her use of colour. But she is an exceptional artist. She makes objects exciting. Jens Søndergaard. Was he good at drawing? Asger Jorn, was he fantastic in his shape? Soulages, is he wonderful in his use of colour? Take all of them. All of the names of all of the greatest – what is it that they do with the materials that are handed to them? They create fantastic art. They show us beautiful weekdays, but certainly also beautiful Sundays – in Paris – And all over the world. “